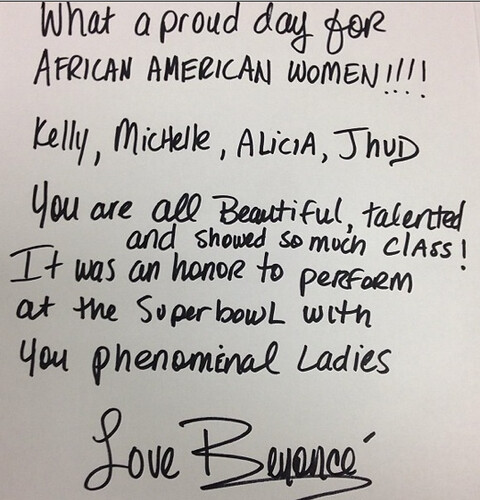 {A letter penned by Beyonce following the Halftime Show}

I am a huge football fan, so yesterday was one of my favorite days of the year – Super Bowl Sunday!  The game was amazing, my team won (Go Ravens!), but what really struck me, beyond the game, was the fact that so many talented African American women were apart of the Super Bowl on a world stage.

The evening started with Jennifer Hudson singing America The Beautiful with the Sandy Hook Elementary School Choir.  Jennifer sang a touching and beautiful rendition of the song.

Then Alicia Keys came about behind a white baby grand piano to sing the national anthem.  She looked amazing, and as usual I was in awe of her ability to sing like she does even when sitting at the piano.  As someone who spent years singing in choirs, I know that is not an easy thing to do.

And then of course, Beyonce rocked the stage (some even suspect she blew out the lights) with an electrifying Halftime Show that included the reunion of Destiny’s Child.

The night’s performances left me feeling so uplifted and inspired.  On one of our country’s largest stages, during Black History Month, and with the second term of our first African American just cemented a month before, five African American women rocked the world, and it was awesome.

It's All About Drew
My House on Apartment Therapy!!!
Press Update!
They Call It Mellow Yellow
Dining Room Decor Ideas
The Week In Review: 10.20.12
Lucky Magazine!
Go Bold in the Bedroom
0 replies

The Week In Review: 2.1.13 Typographic
Scroll to top