Designing a home is no small feat, and that is especially true when designing a pop-up home. Three months ago, our team at AphroChic did just that, designing a concept house that speaks to our brand’s very identity – the mix of modern design and culture in today’s interiors.

The project was an innovative one that made design history. Our pop-up house was the first African-American concept house ever to be created on the West Coast. We worked with the Helms Bakery District in Culver City, California – an area with its own deep history – and were excited to work with the many brands housed on the campus, including Room & Board, HD Buttercup, Vitra, Rejuvenation, Plummers, The Rug Warehouse, La Bella Cosa, Appliances Plumbing Design and Arcana: Books on the Arts. Saatchi Art came on board as our art partner, and with them, we curated 26 pieces from local LA artists that were featured throughout the space. Best of all, we took the show home as an opportunity to debut a few new product collaborations from the upcoming AphroChic 2015 collection. Our new Sisters wallpaper design – which featured prominently in the living room – was created in collaboration with Brooklyn artist, Samantha Hahn. Its beautiful pattern depicting African women in traditional head wraps is an homage to the women of Rwanda, particularly the artisans from Indego Africa who worked with us to create our Solange Knowles-inspired Solo collection of Rwanda baskets as well as our Tagged collection of Batik pillows. Finally, in the bedroom of the space, we debuted a second wallpaper pattern, a dazzling array of stars that we call, Alhambra.

The design was ambitious. In one week, we took a completely empty, 3,000 square foot raw warehouse space, and turned it into a loft-style, California home complete with a faux outdoor kitchen. To do the job, we reassembled our creative team from REMIX, consisting of Bryan and I, Angela Belt who assisted with space design and styling, and Leon Shipp Belt, who worked as our videographer for the project. Together we developed a space that combined the best from all of the Helms Bakery shops to create a home that spoke to modern design, global culture and the new kind of uniquely personal luxury that has become the trademark of the AphroChic brand.

In addition to style, the AphroChic show house also supported a series of interesting dialogues on culture and globalization in design. At the inaugural VIP event that kicked off the three day pop-up event, Bryan and I participated in a designer conversation hosted by Angeleno Magazine. On the second day of the event we hosted our largest discussion panel in a conversation called, “The New Modern: Culture and Design in the 21st Century.” Acting with Bryan as moderators of the panel we led a group of notable designers and L.A. tastemakers that included Kim Myles, Jeff Andrews, Vanessa De Vargas, Joy Simmons and Angela Belt. Covering a range of topics from diversity in the marketplace to maintaining authenticity in global design, it was an excellent discussion that was as thought-provoking as it was entertaining.

The final day of the event saw the space playing host to an amazing discussion on art and curation with Saatchi Art that featured Orlando Soria from Homepolish, and artist Gregg Chadwick among several others.

After a week of implementation and three days of amazing design and discussions we were pooped, but thrilled to have created a space that speaks not only to our own cultural aesthetic, but that has connected with so many who have loved and celebrated The AphroChic House. To view more of the art featured in the home and pictures from the space, check out our Pinterest boards:

Rich Color And Pattern In A Santa Monica Home 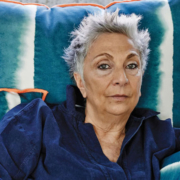 5 Of The Freshest, Modern Wallpaper Brands At Heimtextil

The Gallery Wall Grows Up
Scroll to top