The History of the Juju Hat

We love designing narrative-driven spaces. Part of creating the narrative is identifying beautiful pieces that have a history to them, and implementing them into the homes that we design. Pieces like the Juju Hat. We fell in love with these Cameroonian hats in the early part of the 21st century. Thick with colorful feathers, these ceremonial hats have been reimagined as objet d’art in our residential designs, hanging as colorful decorative elements on walls. Yet, while Juju hats are a common sight on the walls of many modern interiors, for the Bamileke people of Western Cameroon they were once a rare thing reserved only for a select few.

The history of the Bamileke of Cameroon is unique. They are a people both unified and divided, similar and yet distinct. Like so many African cultures they survived the annexation of their land by Germany in the late 19th century only to see that occupation end violently at the hands of the French and British in the early 20th. Though long years of struggle for independence from French and British rule has left its mark on the people and their culture, many Bamileke traditions remain intact, passed from generation to generation as a source of cultural identity and historical pride. The combination of strength, beauty, wealth and pageantry that define the royal ceremonies of the Bamileke are embodied in the elaborate feathered crowns which today decorate rooms around the world – offering everyone a bit of the prestige that was once the sole province of warriors and kings.

Like most Bamileke art, Juju hats (or Tyn, as they were originally called), are created specifically for use at royal festivals or ceremonies. Every Bamileke polity is headed by a chief or king. The king is attended by a committee of eight men known as the mkem or “the assembly of holders of hereditary rights”. Each member of this council is known to have brought wealth and distinction to his state and each acts as the head of a particular society tasked with certain duties within the kingdom. Such responsibilities may be military, economic, legal or otherwise. Every two years the mkem hold special meetings at which the wealth of the king is displayed. At these ceremonies the members of the mkem and their followers don masks appropriate to their societies. The most venerated of these, the elephant and leopard masks are reserved only for the king and for the members of the Kuosi and the Kemdje, both warrior societies. It is with these masks that Tyn or Juju hats are most commonly seen, though occasionally they are also worn alone.

The hats are constructed from raffia which is woven to create the support structure. Afterward, feathers taken from a chicken, guinea bird or other wild avian are dyed and attached to the base. A leather strap attached to the back is used to pull the hat open to its full breadth. The size of the hats varies, particularly among those made for export and use in home decor. When not in use, however, the hat folds up into a highly manageable bundle which not only helps with storage but also acts to protect the feathers within the shell of the much tougher raffia structure. 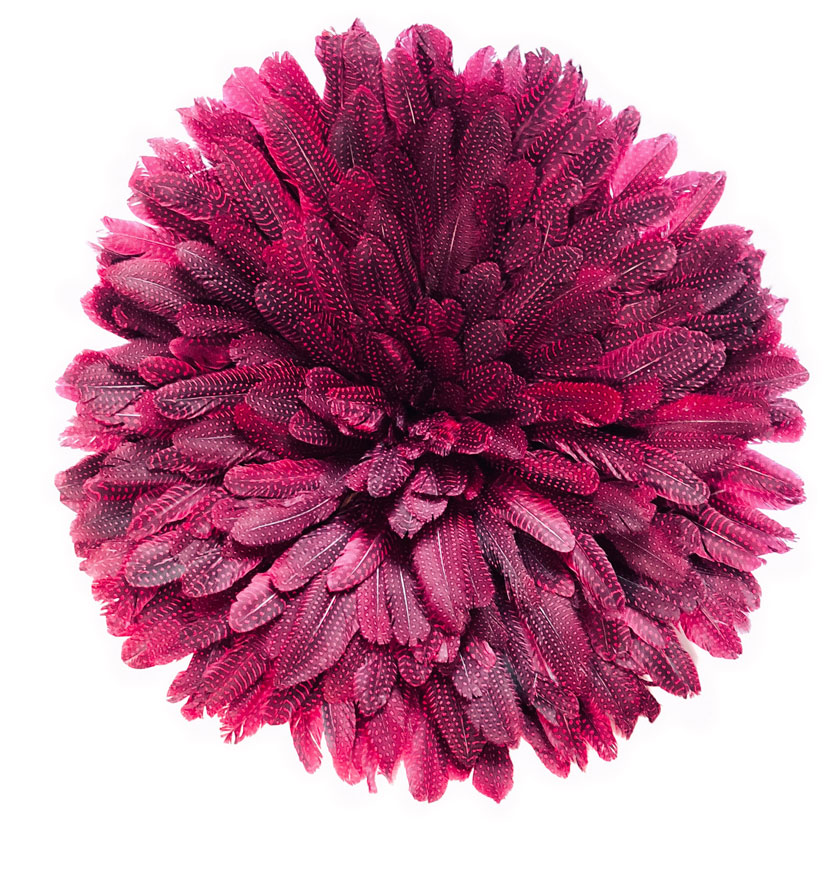 The origins of the name juju are still in dispute. The two prevailing theories about the etymology of the word hold that it is either a derivation of the word djudju, used by the Hausa of northern Nigeria to denote an evil spirit, or from the French joujou, meaning a trifle or toy. Over the years the word has become both popular and well-travelled, being used to describe everything from cigarettes to a popular form of Nigerian music. From the time of its first recorded use in the late 17th century, juju became a popular term among Europeans for referring to West African religions and their healers who were called Juju men. It may be that an observer mistook the wearers of these hats for such healers and applied the name by which we now know the feathered hats that the Bamileke call Tyn.

Today, we’ve reimagined these traditional hats. Our Juju Hat Collection in collaboration with Maman Afrique Boutique offers these hats in new and modern colorways. Explore our hats in red guinea feather, black and painted gold. Each hat, made by hand in Colombia, South Carolina, is a celebration of traditional African craftsmanship.

AphroChic Magazine: Inside Issue No. 1
Scroll to top