We love designing narrative-driven spaces. Part of creating the narrative is identifying beautiful pieces that have a history to them, and implementing them into the homes that we design. Pieces like the Juju Hat. We fell in love with these Cameroonian hats in the early part of the 21st century. Thick with colorful feathers, these ceremonial hats were reimagined as objet d’art in our residential designs, hanging as a colorful decorative elements on the wall. Yet, while Juju hats are a common sight on the walls of many modern interiors, for the Bamileke people of Western Cameroon they were once a rare thing reserved only for a select few.

With New Heirlooms, we have taken our unique perspective on modern design and culture in home decor and designed a collection that looks forward to a time where representation is a reflex, not a trend, and diversity is a habit rather than an act. In anticipation of that moment, New Heirlooms offers inheritable pieces that will stay with families for generations to come.

Black and yellow is the perfect color combination, and this new collection from Klomp Ceramics proves it. The South African company recently released a line of handmade porcelain plates, bowls and cups. The pieces are perfect for setting a bright and graphic table display that brings a little bit of South African style home.

Located in Montreal, Canada, Baba Souk is one of our favorite places for colorful global pieces. With collections brought back straight from Morocco, you can find everything from blush pink kilims to sparkling pillows. Many of the pieces are one-of-a-kind treasures that you’ll want to collect over time. Baba Souk ships to Canada and the US, and we couldn’t be happier as we have a few pieces on our wish list.

Miami designer, Taj Hunter Waite has an eye for what’s on trend in the world of interior design. Her newly launched Global Woman Collection is a celebration of the brightly colored batik prints that are so popular on the African continent. Taj has launched her collection with social justice in mind. Proceeds from the sales of the Global Woman Collection will go to disadvantaged women abroad and locally. This South Florida designer has a mission in mind, and is talking with us today about All Things Taj.

You have been an interior designer for more than a decade. At what point did you begin to feel the need to combine your activism with your work?

I had been working at a design firm, The Architects Hall in Miami, in 1994 and didn’t even know interior design was a profession when I started. I was focused on fashion and wanted to go into merchandising. At that time, in Miami, there weren’t many outlets for aspiring fashion careers, so I was referred to a firm which was primarily architecture. The principal architect, Neil Hall, was heavily involved in both interiors and fashion, and he became a mentor during my tenure. I learned design, space planning, selection of materials, contract negotiations and so on. I finished my undergrad in business and decided afterwards to go to the Art Institute for Interior Design.

Fast forward to 2004, and while still at the same firm we were doing a lot of projects and the firm had strong attitudes towards featuring handmade crafts from the continent of Africa. We moved our offices into the courtyard of a very artsy dining and shopping hub, and at the front of the offices were 15-foot oversized glass windows that we used to showcase art we started to collect, it was like a gallery. I took a lead role with the principal and began to find women cooperatives around the globe that were developing innovative business models to not only help these talented women get their crafts to the western market, but also to be paid fair wages, and to learn business acumen for self-sufficiency. It had a very deep and emotional impact on me.

Personally, my mom passed away from breast cancer when I was 8 years old. Since then, I have been fighting towards achieving that same self-sufficiency. I became very sensitive to the challenges these creative tribes and communities faced. From a design perspective, I grew a deeper appreciation and love for handmade items. Now a mother, I feel even more connected to these women. I see that we all share the same drive as mothers to care for our family, and to protect and provide opportunities for our children.

How has that need for activism shaped the development of your company?

As far as my career was concerned, the primary pursuit was no longer on projects. The drive and excitement I once had for doing floor plans and selecting materials became secondary. My deepest desire is to assist disadvantaged women. I want to contribute in whatever way I can, from within the industry I love, which is design. Activism in fashion brands is everywhere, however it’s not as present in interiors and home décor. I want to be more involved.

In addition to your commitment to international activism you’ve been deeply involved with the art and design community in Miami. What do you feel are some of the key aspects of Miami’s culture and how do you feel that they have influenced your designs?

It’s cliché to say, but Miami is truly a cultural melting pot. It’s funny when I hear it but most people feel they’re in another country when they visit. Culture is such a powerful thing. It’s binding and alienating at the same time.

Miami is predominantly influenced by the Latin Caribbean and South American culture. We are modern in style and attitude. We celebrate mid-century design, and South Beach is art deco too. You see Spanish Colonial or traditional design as well, but it’s secondary. As a multi-racial woman of Caribbean decent, I can’t imagine living anywhere else. Miami is a chic metropolitan and modern city where you can have the feel of island living depending on where you are. This is where we differ from Los Angeles and New York. All of this influences my personal style.

With a successful career as an interior designer, what made you decide to move into starting your own businesses and creating your own products?

It was very much a natural progression.  The Urban Collective – that gallery in the front of our offices – was born in 2004 out of the excitement that came from learning the stories behind the hand-crafted objects we were collecting. My first design was fashion inspired. It was my first cause-driven campaign and we used West African Adinkra symbols designed with Swarovski crystals that were sold on ladies black tank tops. I have now founded All Things Taj as my outlet to be creative as a designer and support the causes that are important to me.

Tell us about The Urban Collective. How did that project come about and how would you like to see it develop in the future?

The mission of The Urban Collective is to promote the high aesthetic of African art and craft in a modern context. It all started happenstance back in 2004, and it ignited a passion in me. I asked my then boss and mentor to be a partner. It was a career shift and my time became fully consumed with the store, sourcing unique objects and traveling to trade shows. Since 2011, the brand has been producing ArtAfrica, the first art show during Art Basel Miami to feature galleries and artists directly from the continent.

With a blog going into its second year, a home decor shop and your own pillow brand you are clearly a woman with a lot to do. Do you see each of these outlets fulfilling a specific need?

I started the blog because I have a perspective about social consciousness within the design industry that I want to advocate. As designers, we can create serious and wide-reaching change without it being a heavy or serious thing. All Things Taj is purpose-driven with a specific focus on uplifting disadvantaged women. I’ve found my way of making activism fun and exciting for myself and I truly hope my blog shares that sentiment.

What’s the next step for All Things Taj?

Creating, creating, creating.  I have now started to search for stockists for The Global Woman pillow collection. Partial proceeds of this collection are designated by the buyers’ selection from a list of causes at the time of purchase. And, I’ll continue to create more cause-driven collections. Essentially, I want to bring philanthropy to home décor.

Your bookshelves are more than just places to store your favorite hardbacks and magazines. They are also the perfect place to display collections, art, and items you’ve picked up along your travels, or inherited from family. Here are 6 inspiring ways bookshelves can be used to show off beautiful, cultural pieces.

Beaded African dolls look lovely on this modern, white shelving unit. They are perfect among the other global sculptures that make this space unique.

A collection of masks and pottery make a striking impact on this open shelving.

The dead space at top of these streamlined shelves has been used to display a variety of pieces for a curated feel.

Rachel Roy effortlessly incorporates a carved Ganesh among her modern collection of books.

A bright golden Buddha statue sits beautifully atop a stack of books.

Emily Henderson displays a number of African statues together on this crisp, white shelving unit.

For more bookshelf inspiration, follow our #aphroshelfie tag on Instagram and show us how you display cultural items on your bookshelves to get featured on our IG feed.

These succulents by Miasolé will make you look twice. Produced in Phoenix, Arizona by Monika Popowitz, these faux succulent forms are absolute works of art. Made using a combination of natural materials including felt and cotton, the vibrant shades and true-to-life construction stands out to create a truly unique nature-inspired piece for the home.

When we spoke with HGTV about writing an article on all things upholstery and featuring the team at Chairloom, we have to admit it was for selfish reasons. Long-time admirers of Molly Andrews and Tracy Jenkins and the incredible work they do giving second-hand pieces new life, we mostly wanted to take a day to head over to Ardmore and admire one of their latest projects – the reupholstery of an entire living room suite for a Main Line family room. Looks like we made the right call. Our team worked to bring this shoot to life, and trust us, this is one reupholSTORY you won’t want to miss. 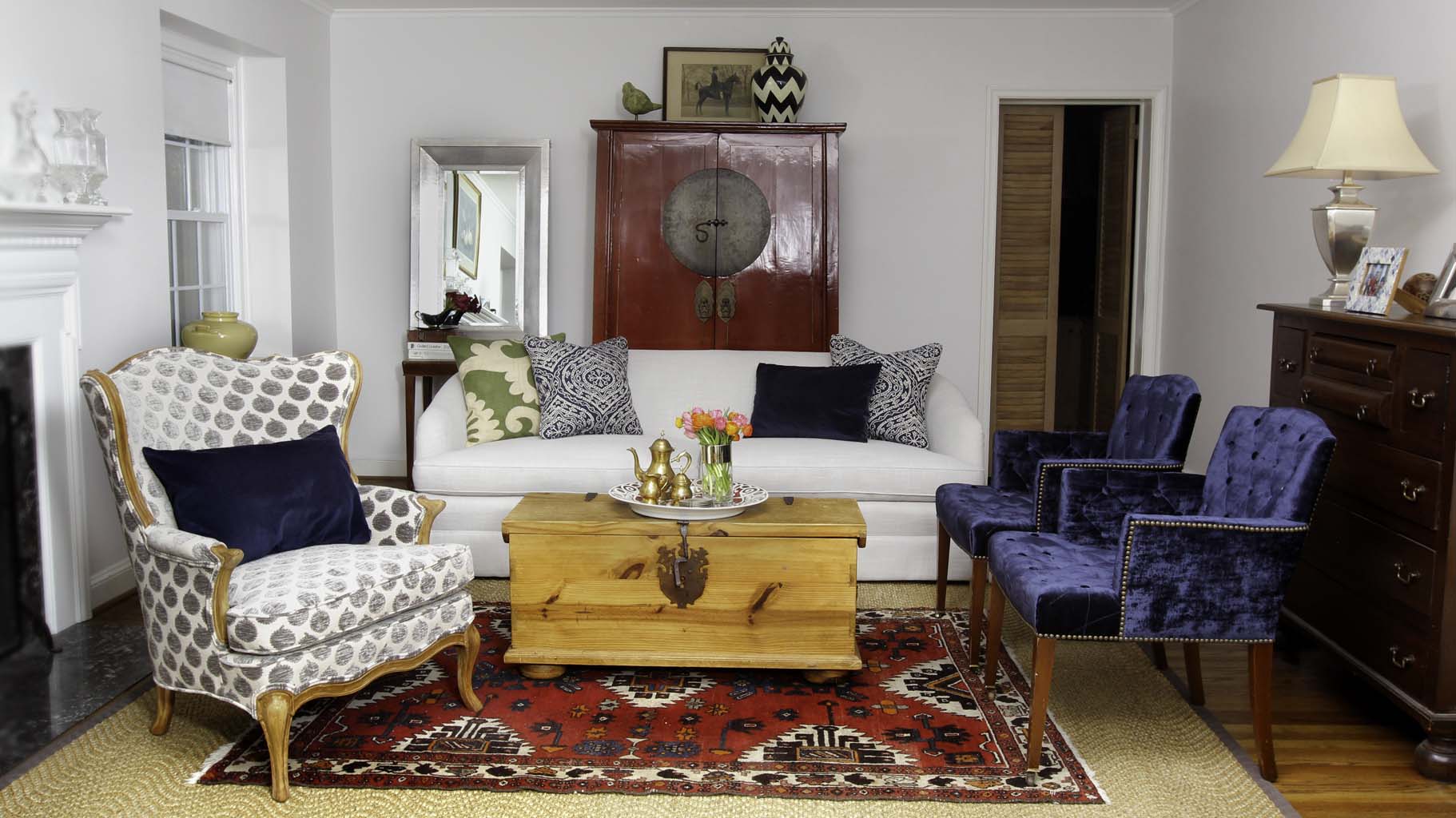 This is an original AphroChic piece created for HGTV.com. Read the full article here.